Episode 114 - Outside the Education Bubble

It’s Tuesday, November 30th, 2010 and welcome to episode 114 of TechTalk4Teachers, I’m Tom Grissom. We are back from a week long Thanksgiving break where I was lucky enough to take a technology holiday and managed to have a solid week of no online activities for the first time since I can remember. I hope those of you in the U.S. also had an enjoyable Thanksgiving break and found some time to reflect on all the blessings we have as Americans. One of those blessings for me is a great public education.


It has been a very busy November here in our college as we are ¾ of the way through the fall semester. We also had our NCATE Accreditation site visit this month that involved all teacher education faculty, staff, and students and we are now awaiting the official report. Accreditation is very important for teacher education programs as it provides mechanisms for measuring and assuring quality programs that benefit our students. As the technology person in our college I was extremely involved in the preparation for the site visit including webmaster duties and committee work over multiple years. After such a busy month I was ready for a bit of a break.

I had some home remodeling work to do last week so I was occupied the entire time with a lot of hard physical work. I made it a point NOT to go online but rather take a break from all the high-tech I experience daily. I come back to work refreshed and with a new perspective along with some aching muscles that I forgot that I had until they reminded me. Those of us in the education field, especially those of us involved with educational technologies, have a tendency to see things through the filter of our own work and often live in the moment of now. We can’t wait for the next greatest thing to come along and tell the world about and how this changes everything. Too often we live in the bubble of our career choice and forget that others may not share our excitement for the next greatest thing that comes along.

Sometimes other technologies catch my eye that are not directly related to education but their underpinnings have great educational potential if harvested and directed in a focused and purposeful manner. Computer gaming is one of those areas that often leads in technological innovation but may take a while to find appropriate uses in the classroom.
Before I left for Thanksgiving break I came across this stat about the xBox 360 game, Call of Duty - Black Ops that sold $360 million dollars in the first 24 hours of going on sale. This is quite an impressive feat for a computer game title. Even more impressive is that it kept up the momentum and reached had $650 million in sales by the end of the first week. I would say this is an unqualified success and I would wager that few educators paid any attention to this news at all as it is typically outside their bubble of concern. Today the computer gaming industry rivals the movie industry and each release is a high-stakes gamble to see if new titles will find success in the market.

So, what does this little side trip have to do with TechTalk4Teachers? First, computer gaming has always had a role in education and often pushes the technological envelope for action and engagement. Games provide for immediate and formative feedback that allows the player to continually improve their skill levels as they reach new levels of the game. Games, when well constructed, follow sound instructional design principles. While Call of Duty Black Ops is rated as a mature game and not appropriate for children the creators have found a balance of storyline, amazing graphics, and a multiplayer mode that immerses the player in the action.
What got me thinking about this over break was the movie, “Waiting for Superman” that caused quite a stir in educational circles back in September and October. On Twitter the tweets were flying around the Waiting for Superman movie and what it meant for public education.

Back in late September NBC hosted a “special” week devoted to education and how public schools are failing. The NBC education week showcased the movie Waiting for Superman for the entire week using it as a center piece for town hall style meetings regarding the woes of current state of public education in the U.S. It was unfortunate that the scope of the conversation was focused around the movie and obviously served as free PR at the expense of many other voices in public education that have a great story to tell. Public education is an easy amorphous target that gets beat up regularly in the media. Public education is also a shining light that has the noble goal of educating ALL children regardless of race, creed, disability, or socioeconomic status.

So, if you are an educator did you hear about the Waiting for Superman movie? Did you watch it? Maybe I am living inside the education bubble but I know many colleagues have. Now, next question, did you hear about the new Call of Duty – Black Ops game released this month? Chances are you did not. I did not see any TV advertisements or any week-long series on major TV networks promoting the game either.
So given the obvious importance of public education for the nation you would think that a documentary movie about public education that has consequences for generations to come and has been hyped by all the major television networks, Oprah, and magazine coverage in Time and the New Yorker; you would surely think the movie would garner enough interest to be a major financial success at the theatres, right?
It depends in which bubble you are living in and your definition of success. As far as dollar sales goes it is no contest, Call of Duty wins by a landslide. Want to guess how many millions in sales Waiting for Superman has sold to date? Remember, Call of Duty – Black Ops raked in $650 million in sales the first week. So what is your guess for total box office sales for Waiting for Superman? According to boxofficemojo.com Waiting for Superman has sold 6.2 million dollars in tickets to date in a little over 2 months. It just amazes me that there is that much difference after a massive PR campaign to get the word out about the movie.

So we have a First Person Shooter (FPS) game rated for mature audiences that has a 100 fold advantage in sales over a documentary movie on public education that may have important implications for public education policy. That in a nutshell is what educators are up against in trying to have meaningful dialogue about the state of public education, we are often drowned out by what is occurring in other “bubbles”.
I felt that there needed to be a little more balance to NBC’s education week coverage but unfortunately discussing the important and deeper implications of improving public education apparently does not make for good TV. Public education is however critical to the success of our nation. I have included a link in the show notes to an article that Diane Ravitch recently published entitled The Myth of Charter Schools that I believe deserves equal promotion to the documentary movie Waiting for Superman. Her conclusion, as is mine, is that no child should have to wait and win a lottery for a top-quality educational experience. Superman should not sell lottery tickets.

The Myth of Charter Schools by Diane Ravitch
http://www.nybooks.com/articles/archives/2010/nov/11/myth-charter-schools/?pagination=false

Technology Pick of the Week
My Technology Pick of the Week this week also has to do with computer gaming and is the new xBox360 Kinect Gaming system that features a sensor that responds to your presence in the room. You essentially become the controller. This technology is in its infancy but already people are hacking the Kinect system and coming up with some interesting applications that I am sure Microsoft did not envision.

I have provided a link in the show notes to an article from PCMag that has embedded videos showing some of the Kinect hacks from YouTube.

I know this is an audio podcast but I encourage you to visit the show notes and go to the provided links about Kinect. The first two videos listed are my favorites. In the first video is labeled Super Mario Kinect where the Kinect is hacked to put you in a Mario game where your actions are replicated on the screen. You can run, jump, lean, and shuffle your way up the various levels of the game as your Mario character mimics your moves. If this technology becomes perfected it may just be the cure for the video game culture of being a couch potato and not exercising because this game can wear you out in a hurry.

The second video labeled Star Wars Kinect shows how the creator of the hack moves a broom handle around the room and it magically appears as a Star Wars light saber on the screen. Imagine the gaming possibilities that you could do with this hack. The Kinect interface is bridging the virtual and real world in a way that we have not seen to date. If you have some time take a look at the YouTube videos and I think you will be impressed with the possibilities.

That wraps it up for episode 114 of TechTalk4Teachers. Show notes for this episode and archived episodes are available on the web at the EIU Instructional Technology Center website at eiu.edu/itc To leave a comment or suggestion, please send an email to techtalk@eiu.edu or leave a comment on the Tech Talk for Teachers blog. Until next time, this is Tom Grissom. Keep on learning…
Posted by TechTalk4Teachers at 8:16 AM No comments: 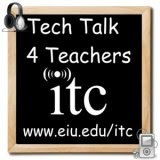